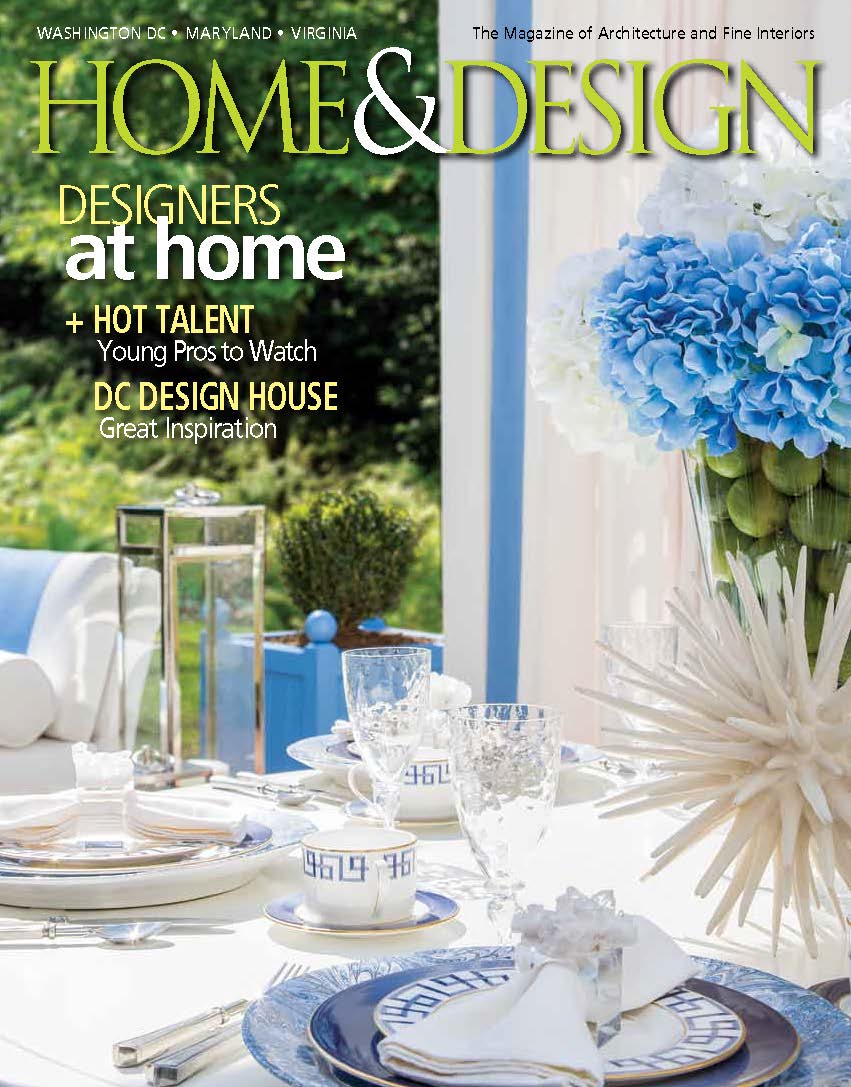 Haleh Design, Inc. was recognized as one of the top and exclusive Interior Designers in the Washington metropolitan area in a sixteen-page article in Home & Design Magazine, showcasing the firm’s design and quality work.

Haleh, Principal of Haleh Design, Inc., who spent many years living in France, is drawn to the Louis XV and Louis XVI styles of the 18th century. “I love classical homes,” she says. “All my life I’ve seen beautiful villas. I wanted to have an 18th-century-style classical home.”Although her focus is on interiors, Haleh was also involved in the design of her home’s façade, seeking symmetry and drawing on the features she so adores—classical qualities with a decidedly French influence. Juliet balconies are wrapped in balustrades filled with scrolling wrought iron on the ground level of the façade, contrasting with classical forms on the second. French doors with eyebrow mullions and an imposing entrance portico reflect her formative years as a student in France, where she lived from the age of 11 to 17. Her school arranged trips to Versailles, the Louvre and other notable architectural icons. “I am so grateful that I had an opportunity to live there and learn the culture and study the art,” she says.

Thus began her love affair with all things French, including domes. “All my life, my passion was to have a dome,” Haleh says. Inside the home, the expanse of the foyer and the double, curved staircase draws the eye 35 feet upwards to a dome and a neo-Greco-style mural depicting images of the sun, fire, water, figures and floating puti—imagery typical of the Renaissance. Tucked into the mural is the likeness of the family’s dog, Polo, an amusing touch in a seriously decorated space. Barrel vaults flank this hemispherical form.

“We wanted your eyes to come from the floor to the ceiling and the beautiful art,” says Haleh. At the top of the stairs, fully visible from the foyer, is a half-dome. Haleh creates “all these little exciting and unique treatments, all with symmetry,” she explains. Surfaces in this home are sculpted; this designer embellishes the space with architectural features and enhances them with gilt, paint and glaze.

In the foyer, columns faux-finished as aged marble stand out against the caramel-hued walls painted in a subtle pearl finish. A broad niche highlights an entrance to the library and two small arched niches painted with flower motifs flank the opening to the grand salon. Deftly applied moldings are defined by gilt.

Opulence and ornamentation often generate clutter, a pitfall Haleh avoids. “The way we do our space planning is very critical,” she says. She attributes this to her knowledge and practice of feng shui. “We do not clutter a space so [much that] energy can’t even flow into it. I want to be able to create a space that is welcoming, to make sure energy flows inside the house.”

As she walks under the staircase and into the grand salon, Haleh explains, “I wanted to create a space within a space. This room is only minimally separated from the foyer, defined by the change of form in the ceiling and the change in pattern of marble tile on the floor.